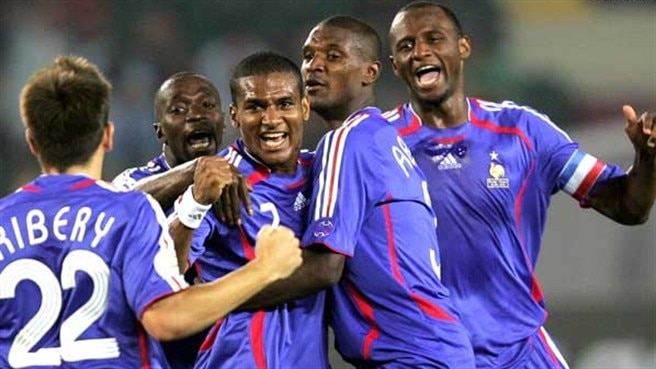 Georgia 0-3 France Les Bleus warmed up for their 2006 FIFA World Cup final rematch with a solid showing on their travels.
Read more

France warmed up for their FIFA World Cup final rematch on Wednesday with an impressive display against Georgia in Tbilisi.

Good work
Olympique Lyonnais forward Florent Malouda opened the scoring early in the contest and it was not long before Louis Saha found the top corner from distance. Under pressure from Thierry Henry, Malkhaz Asatiani could not stop the ball entering his own net 55 seconds after the interval and a good night's work was complete. It could have been worse for Georgia, who topped Group B before kick-off courtesy of their 6-0 win in the Faroe Islands last month, as visiting captain Patrick Vieira had a goal disallowed.

Ribéry assists
Malouda started the ball rolling with a fine right-footed shot from the edge of the area on seven minutes. Franck Ribéry played a part in the build-up and was also involved when Saha fired in spectacularly from 15 metres. The second came just after Shota Arveladze had headed over the bar for Georgia, and the hosts had another good moment five minutes later, only for Gogita Gogua to miss from 25 metres.

No worries
Defensively, the hosts did not find the game any easier. Levan Kobiashvili, Jaba Kankava and Gogua were all booked trying to halt the France assault, while injured full-back Kakhaber Aladashvili had to be replaced by Ilia Kandelaki seven minutes before the break. France, who included veteran duo Lilian Thuram and Claude Makelele, had no such worries and made the points safe when Willy Sagnol's cross found its way into the net via Asatiani, as Henry came in to score.

Chance for revenge
After such a performance, France will have every confidence when Italy visit the Stade de France on Wednesday. Following a 1-1 draw in Berlin this summer, the Azzurri lifted the World Cup on penalties but Raymond Domenech's men will hope to make home advantage count in Paris. Georgia will bid to get back to winning ways but have another tough encounter as they travel to Kiev to face Ukraine.