Published: Sunday 3 September 2006, 0.59CET
Italy 1-1 Lithuania
The Baltic nation earned the result of the night after taking a well-earned point from the Azzurri in Naples. 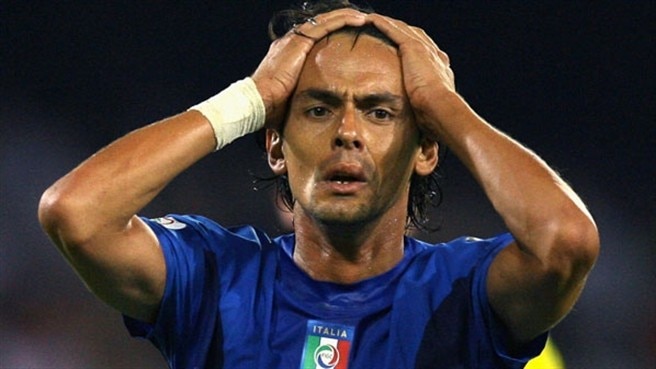 Despite scoring, Filippo Inzaghi was a disappointed man at the final whistle ©Getty Images

Italy 1-1 Lithuania
The Baltic nation earned the result of the night after taking a well-earned point from the Azzurri in Naples.
Read more

Lithuania earned the result of the night after forcing world champions Italy to come from behind for a draw in Naples.

Shock lead
The 28-year-old forward Tomaš Danilevicius, who scored 17 goals in 38 games for Serie B club US Avellino last season, had given the visitors a shock lead in the 21st minute but AC Milan striker Filippo Inzaghi calmed home nerves with a well-taken equaliser nine minutes later. The Azzurri were unable to add a second, however, and find themselves playing Group B catch-up on France, who won tonight and take on Italy in a FIFA World Cup final rematch in Paris on Wednesday.

Buffon save
Lithuania were in the mood this evening at the Stadio San Paolo, a fact underlined in the third minute when Robertas Poškus blasted an effort wide from 18 metres. Four minutes later Danilevicius forced Gianluigi Buffon into a save. Italy, of course, had their moments at the other end. Antonio Cassano, back in the side after missing out on the World Cup, and Gennaro Gattuso both went close but it was Lithuania who struck first.

Cassano assist
Deividas Cesnauskis swung the ball into the box from the right and Danilevicius hit a left-footed shot beyond Buffon and into the net. Italy were stung into action and immediately went on the offensive only to find Žydrunas Karčemarskas in their way in the Lithuania goal. Before frustration took hold, Italy were back on terms. Cassano gathered the ball on the left before feeding Inzaghi to score from inside the area.

Tense finish
Most in the crowd would have expected Italy to dominate from that point, but Lithuania remained a constant threat. Poškus had Buffon diving again to save although it was the hosts who looked the more likely; Andrea Pirlo had an effort blocked and Cassano twice went close. Lithuania hung on and will welcome Scotland to Kaunas on Wednesday with every confidence of adding to their hard-earned point.