Published: Saturday 2 September 2006, 19.06CET
Scotland 6-0 Faroe Islands Five first-half goals were the foundation for a home victory in Glasgow with Darren Fletcher first off the mark. 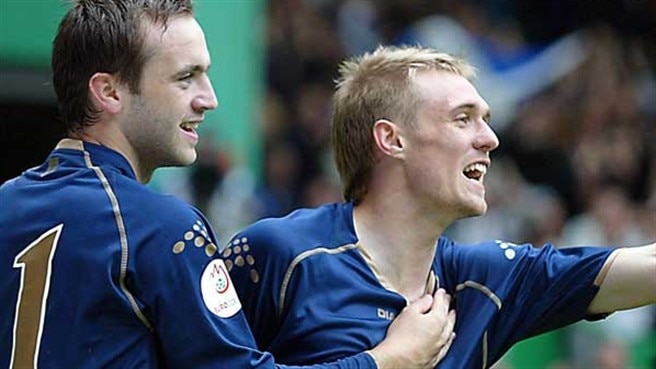 Scotland 6-0 Faroe Islands Five first-half goals were the foundation for a home victory in Glasgow with Darren Fletcher first off the mark.
Read more

Scotland began their bid to reach UEFA EURO 2008™ in fine fashion as five first-half goals laid the foundation for an emphatic home victory against the Faroe Islands in their first Group B fixture.

First-half flurry
The Faroese had suffered a 6-0 reverse at home to Georgia in their opening qualifier last month and were soon on the back foot in front of more than 50,000 spectators at Celtic Park as early strikes from Darren Fletcher and James McFadden put the hosts in control. Kris Boyd and Kenny Miller increased the advantage from the penalty spot before Boyd scored Scotland's fifth seven minutes before half-time and substitute Garry O'Connor rounded off a fine afternoon's work with a late sixth.

Scottish salvo
Walter Smith's side made a perfect start in Glasgow and took the lead as early as the seventh minute, Miller wriggling free down the left to cross low for Fletcher to touch in at the far post. Three minutes later Miller was again involved as the Scots took a stranglehold on proceedings, turning cleverly on the edge of the area and, although he was tackled, the ball broke perfectly for McFadden to curl a low left-foot effort into the corner.

Penalty double
The match was effectively ended as a contest in the 24th minute when Óli Johannesen was adjudged to have brought down McFadden and Rangers FC attacker Boyd stepped up to beat Jákup Mikkelsen from the spot. The Faroese keeper was picking the ball out of his net again six minutes later after Atli Danielsen handled Fletcher's cross inside the box, giving Miller the chance to notch his first goal at this ground since joining Celtic FC in the summer.

Boyd boost
Fletcher also contributed to Scotland's fifth in the 38th minute, his clever through-pass allowing Boyd to outwit Mikkelsen at the second attempt. After a number of missed opportunities in the second period, O'Connor finally added a sixth with five minutes remaining, slotting in McFadden's centre and ensuring his team travel to Lithuania for their second game on Wednesday in good heart. The Faroese are at home to the same opponents on 7 October.