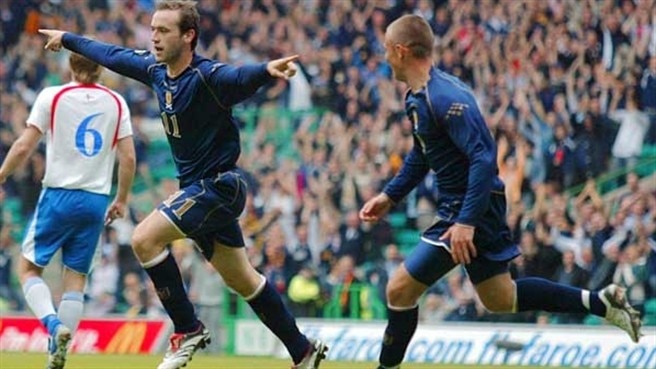 Scotland made it two wins from their opening two UEFA EURO 2008™ Group B qualifiers as second-half goals from Christian Dailly and Kenny Miller secured an impressive away victory against Lithuania in Kaunas.

Promising start
Lithuania, buoyed by their 1-1 draw in Italy at the weekend, started brightly and defender Tomas Zvirgzdauskas threatened to score when Dailly was forced to head his shot off the line, though Scotland showed their intent when Nigel Quashie forced a good save from Žydrunas Karčemarskas soon afterwards. After a tight first period where neither side could force the opener, the Scots needed only a minute of the second half to move in front when Dailly climbed high to meet Gary Naysmith's outswinging corner and nod powerfully past Karčemarskas.

Miller thriller
Lithuania had a glorious opportunity to level in the 57th minute after Scotland were too slow to clear their lines from a free-kick and the ball broke kindly for Robertas Poškus, but he lashed wildly at it with his left foot and blazed over when he should have hit the target. Scotland's influential front man Miller collected his second booking of the campaign - and will be suspended against France in October - but made his presence felt with the visitors' excellent second goal, latching on to a bouncing ball and controlling with his chest before blasting in on the volley.

Poškus miss
Poškus was unlucky not to get more out of a difficult chance he created for himself by hooking a left-footed shot wide before Lithuania set up a barnstorming finish when substitute Darius Miceika pulled one back courtesy of a spectacular overhead kick with six minutes to play. However, the equaliser eluded the hosts and Scotland held on.