Nasri keeps France out in front 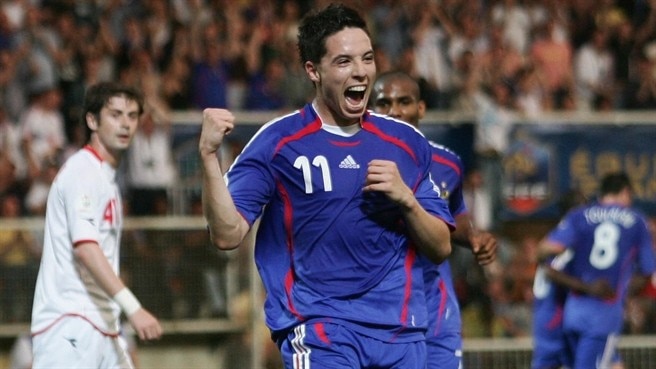 Nasri keeps France out in front

A first-half strike from Samir Nasri earned a narrow win against Georgia that kept France two points clear at the top of UEFA EURO 2008™ qualifying Group B.

Narrow margin
The Olympique de Marseille forward scored the only goal at the Stade Abbé-Deschamps in the 33rd minute, turning in Franck Ribéry's low right-wing cross to open his account for Les Bleus on his third appearance. Raymond Domenech's side controlled the majority of the game against opponents they had beaten 3-0 away in their first qualifier, but they struggled to break down a disciplined Georgia defence and ultimately had to settle for a slender victory.

Nasri delivers
France quickly pushed the visitors back into their defensive third, yet despite their territorial supremacy they had failed to create many clear opportunities by the time they took the lead. The lively Ribéry was the architect, escaping down the right and sending in a low delivery that was deflected for Nasri to turn in. Florent Malouda then glanced a header centimetres past the post shortly before half-time and nearly set up a goal in the opening seconds of the second period, William Gallas flicking his free-kick into the path of François Clerc only for the right-back to somehow steer his shot wide.

Cissé return
The hosts laboured to replicate their first-half dominance, however, leading to the introduction of Djibril Cissé just past the hour. Although the former AJ Auxerre striker's first contribution was to block Nicolas Anelka's goalbound shot, he came close to doubling France's advantage when he raced on to a through-ball and skipped past Georgi Lomaia but, with the angle against him, his effort drifted wide. Cissé also drew a fine save from the Georgia keeper with a low drive but France had already done enough for the win. Both countries are next in action on 8 September, when Les Bleus travel to second-placed Italy and Georgia take on Ukraine.