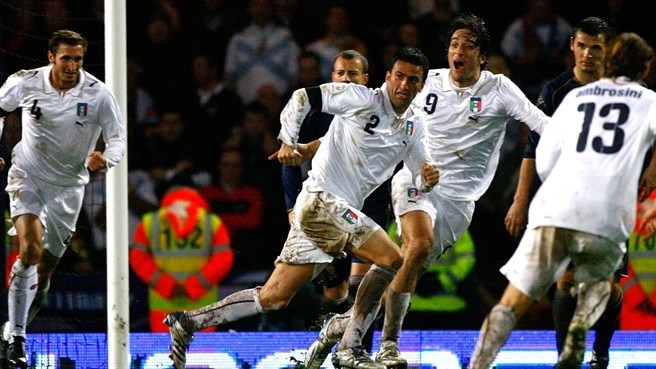 Scottish dream dies
Panucci's goal, which restored Italy's lead after Barry Ferguson had equalised Luca Toni's early opener, also ensured France's progress to the finals, meaning only the identity of the Group B winners is left to be decided when Italy face Faroe Islands and France visit Ukraine on Wednesday. For Scotland, though, the dream of a first major tournament appearance in a decade is dead.

Toni strikes
The hosts needed a win to secure a place in Austria and Switzerland but they made the worst possible start when Toni pounced with an emphatic near-post finish inside the second minute. From Gianluca Zambrotta's throw into the box, Antonio Di Natale collected the ball and crossed low for the big striker who, without an international goal since his double against the Scots in March, drove high into the net.

Set-piece threat
Scotland were rocking and Italy threatened to score again. Mauro Camoranesi fired over, then Toni's rising shot forced Craig Gordon into a save. Set-pieces appeared the Scots' best hope and they had Italy on the back foot with a succession of corners. After white shirts had blocked Alan Hutton's header and Lee McCulloch's shot, McFadden swung another corner in and Hutton nodded a whisker wide.

Di Natale denied
At the back, though, the home defence were struggling to contain Toni and Italy nearly killed the Scots off just after the half-hour. Gordon stopped superbly from Massimo Ambrosini and Di Natale turned the rebound into the net only to be denied by the linesman's flag. After that reprieve Alex McLeish's men nearly stole an equaliser on the stroke of the interval, David Weir's header beating Gianluigi Buffon but not Andrea Pirlo on the goalline.

Last word
Scotland drew level on 65 minutes after Hutton's forceful run had won a free-kick on the edge of the Azzurri area. McFadden's deflected effort fell to Stephen McManus and although Buffon kept his shot out, Ferguson bundled in the rebound. The home supporters sensed a famous victory when substitute Kenny Miller crossed low to the far post but McFadden, a hero so often for Scotland, turned the ball wide. Instead the last word went to Italy as Panucci headed Pirlo's late free-kick past Gordon.