A decade after securing their maiden UEFA European Under-21 Championship trophy with an emphatic victory against East Germany, USSR etched their name deeper into the competition's annals with a similarly comfortable triumph over another Eastern European nation, Yugoslavia. The tournament provided a launch pad for the careers of Andrei Kanchelskis and Aleksandr Mostovoi but it was Yugoslavia's Zvonimir Boban, Predrag Mijatović, Robert Prosinecki and Davor Šuker that really caught the eye.

Šuker strikes
Yugoslavia eased through their qualifying group, beating holders France, Norway and Scotland to secure their passage with a game to spare. Prosinecki and Šuker were among the goals in qualifying and both were on target again in the quarter-finals as Yugoslavia saw off Bulgaria. It was against perennial challengers Italy in the last four that Yugoslavia really impressed. A goalless draw in Zagreb conceded a first-leg advantage and when the Azzurrini fought back from an early Šuker strike to take a 2-1 lead in the return, Yugoslavia's hopes were in the balance. But Boban scored with less than 20 minutes remaining to book a place in the final.

Kolyvanov form
There they faced the USSR who had made similarly impressive progress through the early rounds. Igor Kolyvanov provided much of their impetus, notching up eight goals in their six group fixtures, and the goals continued to flow during the knockout stages. The USSR came from behind in each leg against West Germany in the quarter-finals before Andrei Sidelnikov sealed their progress deep into extra time. They then overpowered Sweden in the last four to book a final date with Yugoslavia.

Big crowd
The USSR took command of the first leg from the outset and went on to win comfortably, 4-2, in Sarajevo. Sidelnikov opened the scoring on nine minutes, and though Šuker soon levelled, two goals either side of half-time through Andrey Chernyshov and Sidelnikov saw the visitors regain the initiative. Robert Jarni reduced the deficit midway through the second half only for Igor Dobrovolsky to restore the Soviet Union's two-goal cushion. It proved a decisive blow. Over 18,000 fans turned out in Simferopol for the return to see the home team further extend their advantage, winning 3-1 to run out 7-3 aggregate victors. 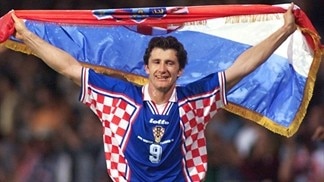