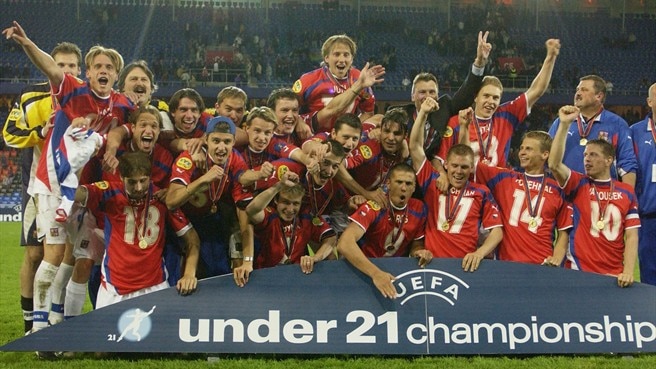 Petr Čech was the hero for the Czech Republic as Miroslav Beránek's side defeated France 3-1 on penalties to win the UEFA European Under-21 Championship in 2002. Čech's superb display ensured the final finished goalless, and he made two more saves in the penalty shoot-out before Jean-Alain Boumsong hit the crossbar to end French hopes.

France impress
The tournament had begun with victory for France over their eventual final opponents, and few would have envisaged the tables would be turned so dramatically after that opening game in Geneva. France defeated the Czechs 2-0 and breezed through Group B thanks to further victories against Greece and Belgium. The Czech Republic recovered to defeat Belgium but were then held by Greece; enough to take them through as runners-up, but it was an inauspicious start for the eventual winners.

Maccarone goals
Group A was tighter, with just two points separating winners Italy and bottom-side England, who failed to live up to their pre-tournament billing. Portugal also underachieved, and their 2-0 defeat by hosts Switzerland ultimately cost them a place in the semi-finals. Italy opened their campaign with a 1-1 draw with Portugal before a pair of Massimo Maccarone goals saw off England's challenge. That meant Italy needed just a point against Switzerland to finish top - a goalless draw took both sides through.

Golden goal decider
Switzerland's surprise challenge would end in the semi-finals, defeated 2-0 by France thanks to second-half goals from Steed Malbranque and Pierre-Alain Frau, but the second semi-final between the Czech Republic and Italy, a rematch of the 2000 final, would prove a more exciting affair. Trailing 2-0 with time running out, Andrea Pirlo brought the Azzurrini back into the game with an 86th-minute penalty before Maccarone struck again to take the game into extra-time. Here, however, Italy's resurgence ended, Michal Pospíšil's Golden Goal ensuring that this time there would be no way back for the champions.

'Great goalkeeper'
The goals dried up in the final, due largely to the brilliance of Čech, whose performance helped erase memories of the Czech's final defeat in 2000. For France, the likes of Sidney Govou, Steed Malbranque and Péguy Luyindula promised much for the future, but the present belonged to the giant opposition goalkeeper. "They had a great goalkeeper, great not only in size but also in the way he played, and that made the difference," a disappointed France coach Raymond Domenech said after his side's defeat.