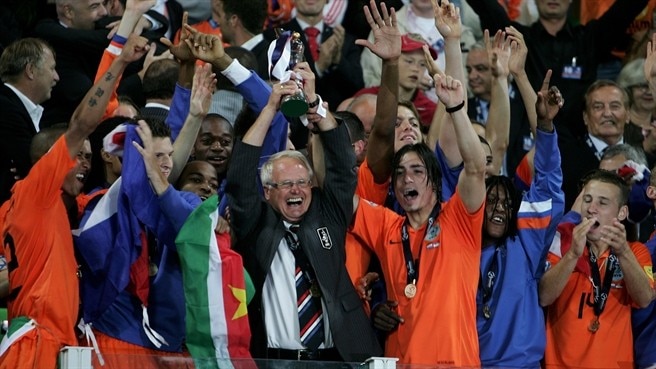 Twelve months after winning the UEFA European Under-21 Championship for the first time, the Netherlands retained the trophy in style with a 4-1 win against Serbia.

De Haan hero
The scoreline was tough on Serbia, who impressed throughout the competition less than a year after being granted full UEFA membership. But just as it had been in the final against Ukraine in Porto in 2006, this was to be the Netherlands' night, and in particular that of coach Foppe de Haan whose name rang round a packed Euroborg Stadion in Groningen at the final whistle. Before De Haan's appointment in 2004 the Netherlands had never won a UEFA competition at youth or U21 level. Now winning had become a habit.

Drenthe joy
The Jong Orange kicked off with a 1-0 victory against Israel at the Abe Lenstra stadium in Heerenveen where De Haan had made his name as coach. Only two of the side that had started the final twelve months previously were in the team here but the home fans quickly settled on a new favourite as Royston Drenthe set the game alight with some marauding runs down the left. He crossed for Hedwiges Maduro to score the only goal after ten minutes and proved the inspiration in the 2-1 victory against Portugal three days later that ensured the Dutch finished top of the section to qualify for the semi-finals and the 2008 Beijing Olympic Games.

Serbia soar
They were joined there by Belgium, who having drawn with Portugal and beaten Israel, earned their place in the last four with a pulsating 2-2 draw with the Dutch in Heerenveen. Belgium coach Jean-François De Sart said his side were "writing history for Belgian sport" and thousands of his compatriots poured over the border to cheer on his team in their semi-final against Serbia. The celebrations, though, soon died down as goals from Aleksandar Kolarov and Dragan Mrdja propelled Serbia into the final. Miroslav Djukić's side had sent out a clear warning with 1-0 victories against Italy and the Czech Republic, forcing England to settle for the runners-up spot despite beating the Serbs in their final Group B game.

Epic shoot-out
After a goalless draw against the Czech Republic, Leroy Lita sparked England to life with a goal in a thrilling 2-2 draw with Italy. He hit another against Serbia and was on the scoresheet again against the Netherlands in the semi-final where his first-half strike looked likely to send England through until Maceo Rigters hit back with an overhead kick deep in added time. The match was decided by an epic shoot-out that the Netherlands won 13-12. In all 32 spot-kicks were needed to seperate the sides, and records were set for most goals scored in a UEFA competition match as well as most in a shoot-out. The hosts and holders ultimately emerged victorious when, almost three hours after kick-off, local Heerenveen hero Gianni Zuiverloon fired past Scott Carson.

'Very happy'
There was another shoot-out the following night in Arnhem where Italy defeated Portugal after their play-off for the fourth Olympic place had finished goalless. Dutch attention, though, was already turning towards the final. Well over 200,000 people had attended matches during the tournament, a record at this level, with an average of 22,000 watching the Netherlands. The stands were a sea of orange for each home game and it was no different in the final where goals from Otman Bakkal, Ryan Babel, Maceo Rigters (his tournament-leading fourth) and Luigi Bruins ensured a 4-1 victory. "Winning this two years running is remarkable," De Haan beamed. "I'm proud of the guys. We were a new team, a young team, and that made it hard, but I'm very happy." 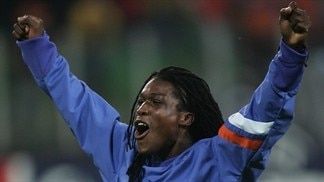