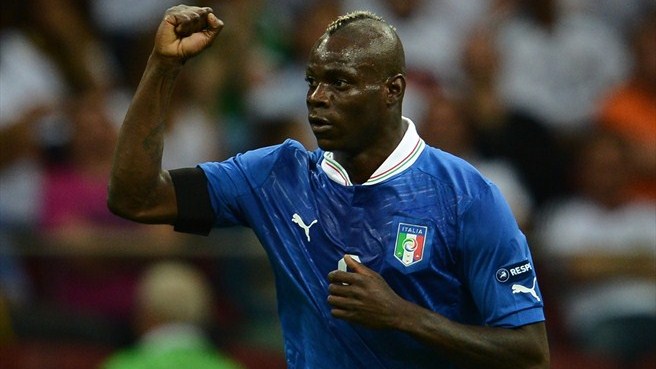 Germany 1-2 Italy
Mario Balotelli struck twice as Italy once again proved Germany's nemesis, Cesare Prandelli's side holding on in Warsaw to set up a final against Spain.
Read more

Italy once again proved to be Germany's nemesis after Mario Balotelli struck two first-half goals to set up a UEFA EURO 2012 final against Spain on Sunday.

Joachim Löw's side came into the semi-final full of confidence having swept all before them in Poland and Ukraine, but perhaps lingering at the back of their minds was the fact that Germany had never beaten the Azzurri in seven competitive meetings. That tally is now eight after Italy produced a wonderfully measured performance with Balotelli at its heart.

Cesare Prandelli's side neutralised Germany's dynamic approach, and found their No9 in clinical form. The striker headed his side in front midway through the opening period and doubled the advantage nine minutes before half-time. Germany threw everything at their opponents after the restart, but their breakthrough came too late, Mesut Özil converting an added-time penalty that only offered fleeting hope.

Prandelli has described his side as a work in progress but, after surviving a nervous opening, they were soon looking like the finished article. In the early stages, only Andrea Pirlo's torso stopped Mats Hummels giving Germany the lead, and then Andrea Barzagli watched helplessly as Gianluigi Buffon's parry ricocheted off him and just past the post. Italy soon found their stride, though.

The busy Riccardo Montolivo forced Manuel Neuer to stretch, before Antonio Cassano had the goalkeeper going the other way. Özil and Toni Kroos, on his first start of the tournament, tested Buffon again, but the Azzurri were looking the more dangerous side. In the 20th minute, they made it count. Pirlo, ever the instigator, swung the ball out to left-back Giorgio Chiellini who fed Cassano. The No10 tricked Hummels and delivered an inviting cross. With the door was wide open Balotelli merely needed to put his head on it as it flashed past Neuer. It was Italy's first UEFA European Championship semi-final goal on their fourth appearance.

Germany reacted as expected for a team who had won a world-record 15 straight competitive games. Özil made Buffon work, and Federico Balzaretti just cleared Jérôme Boateng's dangerous centre. Prandelli has urged his team to resist sitting on a lead on all tournament, and the second duly came – although it was a classic Azzurri counterattack.

Buffon had just made a flying save from Sami Khedira, and batted away the resulting corner which Montolivo picked up. The new AC Milan recruit looked for Balotelli straight away, his ball over the top evading Philipp Lahm, and the striker sped away to rifle a shot into the top corner for a finish every bit as emphatic as his first.

Löw had proved in his starting XI he was not scared to tinker with his personnel, and made changes at half-time, Marco Reus and Miroslav Klose coming on. Reus's first involvement was a effort on goal and then Lahm could only lift his shot over when well placed. Özil got to the byline, but Khedira got in a tangle.

Buffon's fingertips just did enough to send a Reus free-kick on to the bar and away to safety, yet Balotelli was still a menace at the other end and Claudio Marchisio nearly made it three on two occasions. As German belief ebbed away, Antonio Di Natale had a clean run on goal only to fire wide.

Balzaretti handled in his own area with time running out and Özil finally beat Buffon, but it merely offered forlorn hope. Löw's side may have been the tournament's great entertainers, but it is Italy who are in Sunday's final after once again being Germany's bogey team.