Published: Sunday 14 July 1991, 9.28CET
A new name, with official status now bestowed on the tournament, in 1991 did not bring a new winner as Germany triumphed again.
by Paul Saffer 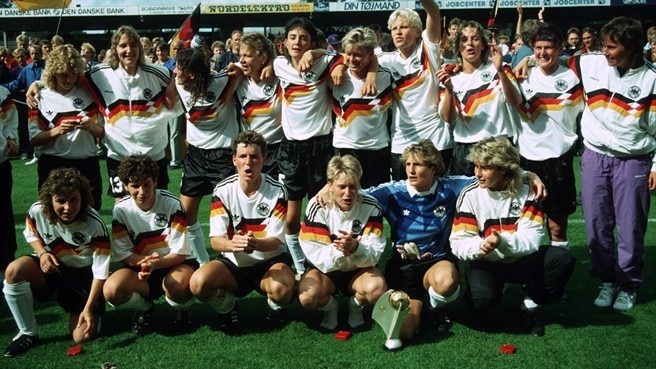 A new name, with official status now bestowed on the tournament, in 1991 did not bring a new winner as Germany triumphed again.
Read more

For the fourth edition of what was previously known as the European Competition for Women's Football, official status was bestowed on the tournament, hence its rebranding as the UEFA European Women's Championship. The format barely changed from the previous event in 1989, and the outcome was similar too.

With 18 nations now entering, a fifth qualification group was added. Groups 1 and 2 contained three teams, with only the winners progressing to the quarter-finals. Up against the Republic of Ireland and Northern Ireland, the Netherlands stormed through Group 1, scoring 17 goals without reply. Sweden were equally comfortable in Group 2, winning their four games against France and Poland. In the other three four-team pools, the top two advanced.

Having been eliminated two years earlier in a section including Norway and Finland, England again met those opponents in Group 3. Former champions and 1989 runners-up Norway recorded a 12-0 goals margin in winning the pool, and England also went through after drawing their decider 0-0 in Finland. Holders Germany easily topped Group 4, with Hungary withstanding a late Czechoslovakian surge to join them, while Denmark and Italy were the leading lights in Group 5.

Both 1989 finalists negotiated the quarter-finals, Germany defeating England 6-1 over two legs and Norway beating Hungary 2-1 at home and 2-0 away. It took until extra time of the second leg for visitors Denmark to score the only goal of their tie with the Dutch, while Italy drew 1-1 in Sweden and 0-0 at home to advance on away goals.

There was some consolation for Sweden as the 'best' losing quarter-finalists as they claimed one of Europe's five berths in the first FIFA Women's World Cup in China - where they would beat Germany to third place.

Denmark staged the final round, and hoped to maintain the perfect record achieved by the two previous hosts. But in an epic semi-final in Hjorring, their game with Norway ended goalless and the Danes went down 8-7 on penalties. A day later in Frederikshavn, Germany won the only match of the finals to finish in 90 minutes, seeing off Italy 3-0 to set up a repeat of the 1989 showpiece.

It was in extra time that Denmark claimed third place in Aalborg, overcoming Italy 2-1. And after 83 minutes of the final, Norway and Germany were locked at 1-1, Birthe Hegstad's 54th-minute goal being cancelled out within ten minutes by Heidi Mohr, who had also struck in Germany's 4-1 final win two years earlier and twice in the semi-finals.

As the game appeared destined for extra time, Mohr found the net again and captain Silvia Neid made things safe two minutes later. Germany's status as Europe's dominant force in women's football was assured, and has remained largely intact for most of the subsequent 14 years. Not many people have won major honours as both player and coach but Silvia Neid is in that select band having captained Germany to 1989 and 1991 success.
More